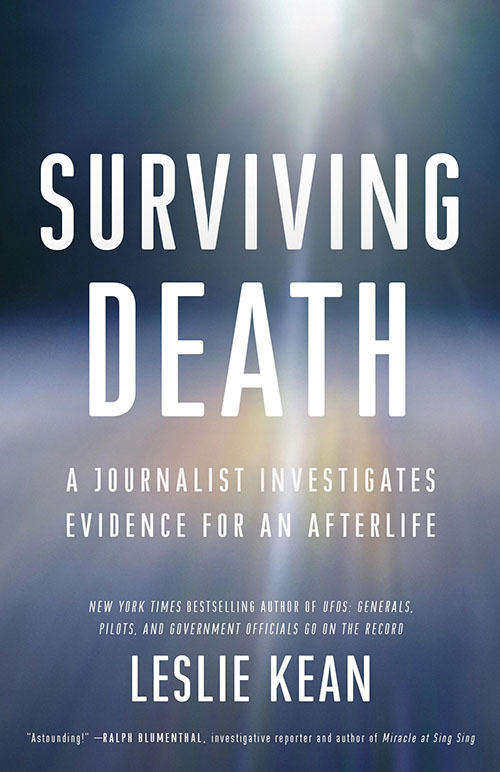 “While exploring the evidence for an afterlife, I witnessed some unbelievable things that are not supposed to be possible in our material world. Yet they were unavoidably and undeniably real. Despite my initial doubt, I came to realize that there are still aspects of Nature which are neither understood or accepted, even though their reality has profound implications for understanding the true breadth of the human psyche and its possible continuity after death.”

Kean explores compelling case studies of two young American boys reporting numerous details from past lives, later verified as accurate; contemporary mediums who provide accurate readings while tested under rigorous controls; a responsive apparition who provides information about her life on earth; extraordinary accounts of actual-death journeys into a sublime afterlife dimension by patients with no brain function; and plaster molds made by materialized hands and feet during a scientific study where any possibility of fraud had been eliminated.

During the course of her investigation, Kean also directly experienced inexplicable phenomena - with life-changing results. She observed the affects of mysterious forces, acting with apparent intelligence, able to move objects; received obscure and accurate details from possible discarnate loved ones communicating through people unknown to them; and she observed contemporary, genuine physical mediums facilitating levitations, independent voices, and materializations of physical forms.

Throughout Surviving Death, Kean remains mystified but deeply curious. How can it be that an apparition returns a wave from a human observer? Or that people watch their own resuscitation from the ceiling in the operating room, aware that they have left their bodies? How about a human hand materialized by a declared disembodied survivor of death, which many people (including her) have witnessed and touched on multiple occasions? Such phenomena are hard to believe as real, but Kean points out that strict journalistic protocols can be applied to any topic for which there is data, no matter how unusual or even indeterminate. The reader will be the judge.

Based on facts and scientific studies from wide-ranging, disparate areas of investigation that ultimately interconnect, Surviving Death also includes fascinating chapters by medical doctors, psychiatrists and PhDs from four countries. As a seasoned journalist whose work transcends belief systems and ideology, Kean enriches the narrative by including her own unexpected, and very personal, paranormal experiences encountered while she probed the universal question concerning all of us: Do we survive death?

These photographs are protected by copyright. Reproduction in any form is not permitted without permission.